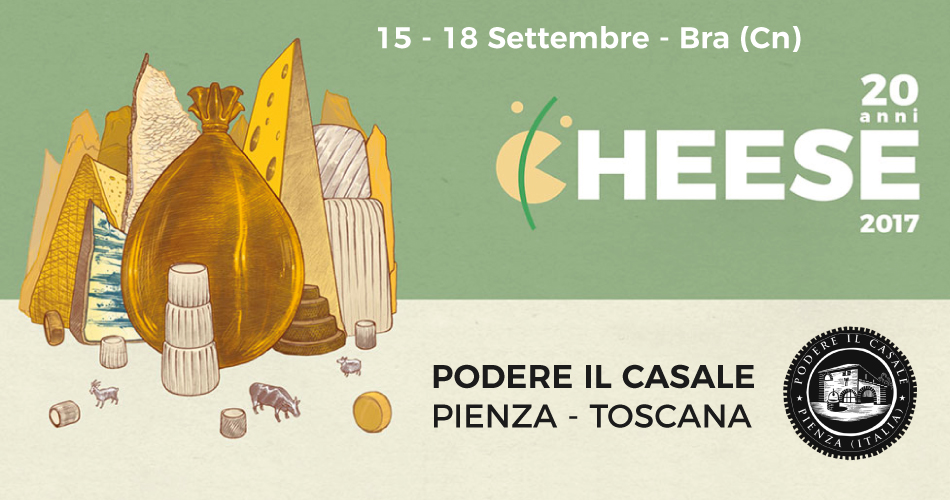 Raw milk cheeses will be the essence of this 20th edition of Cheese 2017. The international event of Slow Food and City of Bra dedicated to the dairy world. This year the event celebrates its twentieth birthday. A special edition, free entrance, from September 15th to September 18th for the streets and squares of Bra.

Cheese 2017 returns to focus on raw milk. The 2017 edition is announced as “The States of Raw Milk” and will be a real revolution. For the first time, Cheese 2017 will only host exclusively cheeses made with non-pasteurized milk. Cheese that tells about their land of origin, like those we produce at Podere Il Casale in Pienza.

The aim is to explain why it is necessary to defend raw milk cheeses. We could not miss this important event, especially when a topic so important for us is at the center of the festival. At Podere Il Casale we have always produced raw milk cheese, using only the milk of our flock. Producing raw milk cheese means respecting the territory, tradition, animals and consumers. It means telling the truth! That is why we are very happy to attend this special edition of Cheese 2017 to win the challenge of raw milk.
To learn more read also “Why Raw Milk Cheese”

This edition of Cheese wants to raise awareness, revitalize the raw milk movement and define the guidelines for the future. Talking about raw milk today makes more sense than ever because it is about art and culture as well as an authentic expression of the best gastronomic traditions. Raw milk cheese is in danger of extinction because it is deeply in contrast to sterilization, homogenisation and of massive food products. Raw milk cheese is also deeply tied to the land it comes from and its expression of biodiversity.

We look forward to Cheese 2017 from September 15th to 18th. There will be over 300 exhibitors alongside 36 independent breweries and 15 street kitchens and Food Truck. There will be guided tastings, dinners with great chefs, meetings and conferences, children’s appointments and much more.

Podere Casale Pienza awaits for you at Cheese 2017 with our organic cheeses.