Ulisse, who moved to Pienza in 1991, is one of the founders of the farmhouse. His longing for a life closely linked with natural rythms and his interest in pastoralism, agriculture and cheese production are the main reasons that lead him to leave his life and work in Switzerland. What had then started as a simple idea has now become his world. To achieve it, Ulisse had to overcome many complicated bureaucratic issues, but now, when he is working in his cheese farm, milking
ewes and goats, sowing seeds, collecting produce, building something with his own hands or driving his tractor, he is really happy. If only each day had 48 hours!
Sandra is one the founders of the Casale. She too came to Pienza from Switzerland in 1991.
Sandra takes care of the visitors, guests and house. She isn't involved that much in the nitpicking part of Italian bureaucracy nor in the field of administration, but when she is showing the farm to visitors, her eyes light up and her stories on the life at the farmhouse arise many deep emotions. Her
charisma and flamboyant energy make of her a beloved host to anyone visiting Podere Il Casale.
The last few years have seen Sandra become a grandmother. At last, her five children are no longer her hardest task...
In the meantime, four of Ulisse and Sandra's children have fully grown up and three of them are no longer staying at the farm. Michael (nicknamed Micha), on the other hand, has decided to stay and lend a precious hand by taking care of the marketing part as well as of the general organisation, daily administration and restaurant. He also follows the national and international retail of the Podere Il Casale's product line. 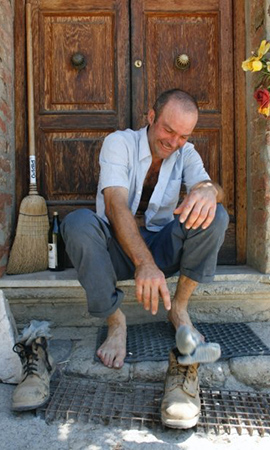 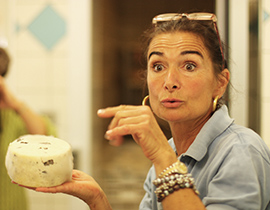 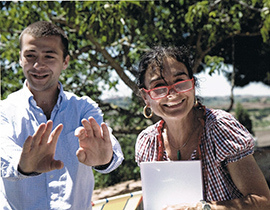